It’s funny how time gets away from us…today was one of those days where I struggled to pace myself and not get sick, but somehow I can’t recall how, the whole day is a jumble. I spent time with Korky, and that’s so important to me…I did my usual workstuff, but right after supper I realized Danny had not had his walk, and the days are growing shorter all the time…so off we went, “marching” as Alex calls it, around the perimeter of the big field out back. It was one of those early fall evenings wherein the light is so gorgeous and the air so beautifully sweet, you want to grab the nearest camera and video it to share with the world…just loveliness…but then the realization that it’s impossible to capture the essence of some beauty on any kind of film.In front of the house, the ancient Bur Oak was, as it always is in September, filled with starlings to such an extent it actually shimmered with the setting sun catching their iridescent feathers, and they all rustle about emitting their magical, mysterious sounds. That oak full of those birds…is something I will miss like I can’t describe. But I’m not going there right now, into the pain of upcoming change and uncertainty. I just stood and reveled in the magic, and then headed out back with Dan, shuffling a little in my inappropriate shoes, as he bounced about cheerfully, as only Dan can do.

No deer anywhere….last night Tilia and her two fawns, plus the sweet female I call Funnyface, were here by the end of the news, 6:30 ish. Tonight was clear. So we followed the treeline, around the little spring lined with hawthorns – amazing red berries! and past the  silent place where an oak, ash and thorn intertwine, where Amidala’s spirit dwells. I let myself think back on the 11 years since we moved here, all the changes – so many changes! and settle into gratitude for the opportunities, the growth, the passages and  the time.
Certainly, I will leave here almost a different person from who I was when I moved in, 11 months almost to the day after my brother’s death…still dazed and numb with disbelief and pain. And the air stayed heartbreakingly sweet and fresh, a lone mallard flew awkwardly overhead, the birches sighed sympathetically. It was sorrow without despair, intermingled with immediacy, the starlings, the promise of fall everywhere, from the crimson Virginia creeper to the soft yellowing on the maples, to the lengthening shadows at 7 pm.
September. We come home to hot elderberry tea and a quiet snuggle, all of us together in our den….windows still open to catch the owls and wolves deep into the night.
And this I know…there will be another sanctuary, and with any luck, the right one this time. 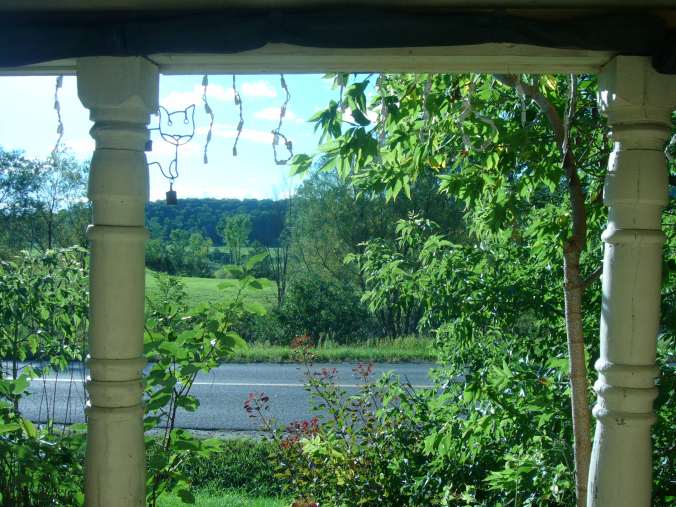